Founded in 1972 by Jim and Marta Nixon, the first location of The Cleaners was in Greeley, Colorado. Jim and Marta were schoolteachers in Texas prior to entering the garment care business. They selected the Colorado location because of its growth potential and beautiful scenery. Through the years, the company grew to more than ten locations with over fifty employees. Recent reorganization has concentrated the operation into five stores, all of which are located in Northern Colorado and known as Nu-Way Cleaners.

Jim has served the industry as president of the Rocky Mountain Fabricare Association (RMFA) and went on to serve on the Board of Directors of the International Fabricare Institute ( now the Drycleaning and Laundry Institute, or DLI ). This included four years as Director for District 7 (which encompasses ten western states) and one year as President of the national association. Marta also served as president of the Rocky Mountain Fabricare Association and was supportive of Jim’s association work until her death in 1997 from breast cancer. The Cleaners is a strong supporter of The American Cancer Society’s programs and the Coats For Folks and Family Food Drive activities. 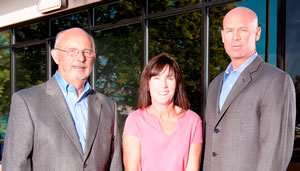 The family tradition continues as the Nixon’s daughter, Mary Marta, and her husband Brad Ewing are both active in the business. Brad is general manager of the operation and he too has served as president of the Rocky Mountain Fabricare Association . Brad has also served as the District 7 District Committee Member (DCM) on the Drycleaning and Laundry Institute (DLI) board of directors. In 2012, Brad was elected to the Board of Directors of DLI for District 7. Brad also holds the Certified Environmental Dry Cleaner designation from DLI. Mary is responsible for customer service relations and she also serves as the Executive Director of the Rocky Mountain Fabricare Association.